I was working in the yard today and looked up just in time to see a large male bear wandering past the vegetable garden. I’m not sure where he came from but it looks like he had been rolling around a bit – perhaps just got up from a nap. I hadn’t seen the male around since the Spring but he is looking fit and healthy albeit a little muddy. 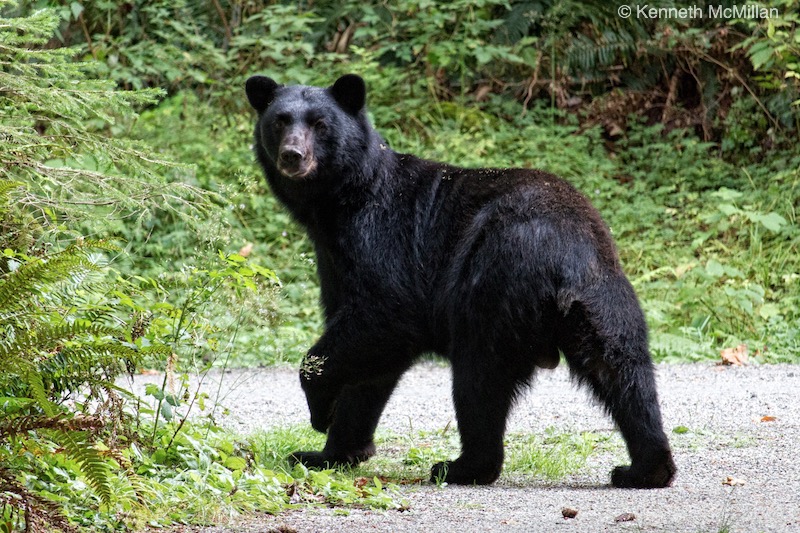 Hope you don’t mind all the pictures of bears. That’s the problem with photographers, we tend to obsess. Go to the ocean and take 300 pictures of waves, go to the Rockies and it is a hundred mountain peaks. Go to the forest and it’s the bears. 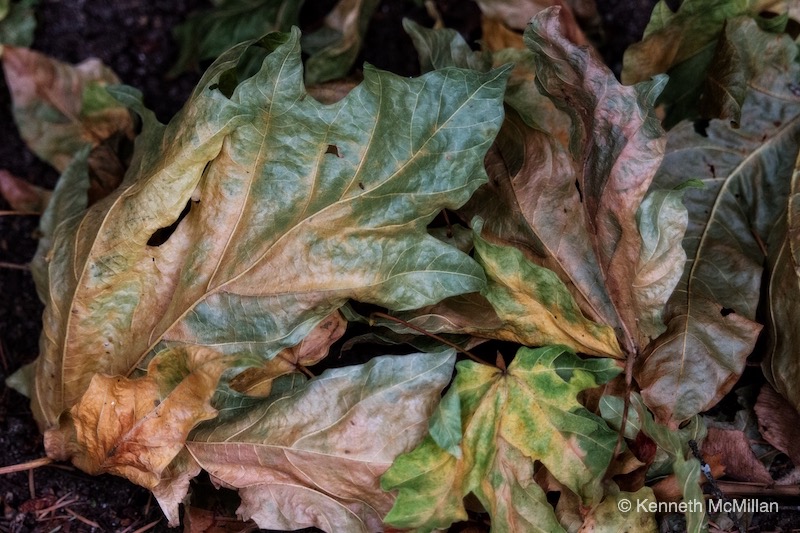 The new chickens, Kate and Anna, are settling in well although there have been a couple of surprises. The other day I went out because Kate was doing a lot of squawking and complaining.

Kate is a much different chicken than our old Beulah. Beulah was a talker and I had many back and forth conversations with her. Kate is an orator. Loves to hear her own voice and it is pretty much a one sided conversation with her. She reminds me of the American election campaign where there is a lot of noise but not much substance.

Anyway, I went out to see what her problem was – apparently nothing – and reminded her that she hadn’t laid her egg yet. A couple hours later I checked the nest and found a very small egg in it.

I thought that was pretty weird and headed straight for Google. I found out that it isn’t too unusual for young chickens to produce these eggs although it was the first that I have seen. These small eggs have several names – wind eggs, fairy eggs, witch eggs and fart eggs. They are all part of a young chicken adjusting to her new egg laying routine. After playing her little joke Kate is back to producing her large brown eggs.

In the meantime Anna has turned broody and spends most of her time on the nest trying to hatch her eggs even though I remove them each day and, because we don’t have a rooster, they are infertile.

Hopefully she will give up soon and enjoy the last of the Summer days.  Anna reminds me of the days when we had Banties running free in the yard. Every so often one would disappear and 21 days later come out of the bush with a clutch of chicks. They were always wonderful, protective mothers and fun to have around. Now that we are seeing so many more predatory animals around a chicken wouldn’t last long running free.

To give the girls a bit of variation I have created a Chicken Chariot. This wheeled cage rolls up to their coop,

I open the sliding doors and they hop in and I close the door. I can then roll it around the yard so they can dig in fresh grass or soil for the day. I still need to paint the racing stripes on it.

A disappointing day for the bears yesterday – I picked all their hazelnuts (filberts)! 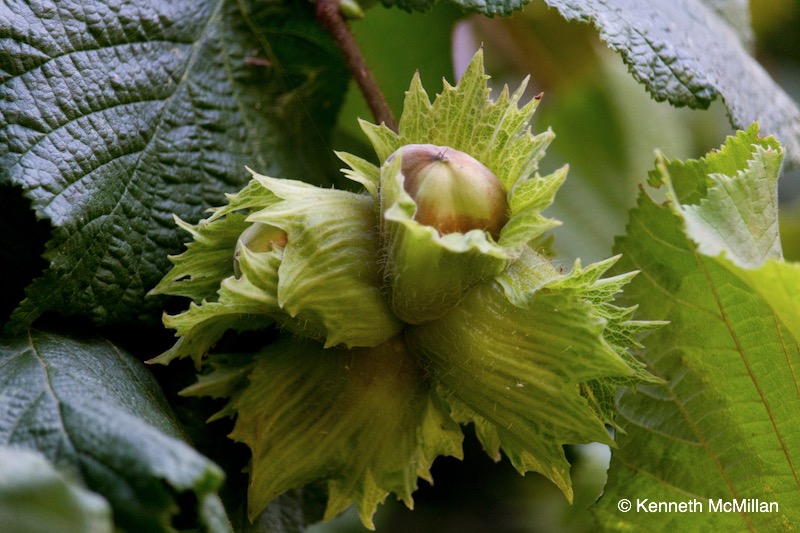 I was a few days early but I felt I couldn’t leave the nuts on the tree any longer.  Our province, British Columbia, is trying to encourage us to be more conscientious when interacting with bears and has Bear Smart programs running in several communities in the province. Part of the program is encouraging people to pick their crops when the fruit is ripe. So… I started picking but the competition was tough.

We ended up with about 16 pounds of nuts though they still have to be peeled out of their outer husks.

In a bear-free ideal world the nuts would be left on until they were quite brown and loose in their husks.   The tree could then be harvested with a good shaking. However in our situation hand picking was the best recourse. It has to be done carefully, the nuts can grow singly or up to five in a cluster. They grow off a single 1/2″ stem, much like an apple and care has to be taken to break the cluster off at the stem. Like apples, if the branch is broken instead, next year’s fruiting buds are being destroyed.

I hate disappointing the bears. They are just doing what they do. I keep my trees pruned low and shaped on the horizontal. The bears find it a perfect hammock and will stretch out and lie on the top branches.  They don’t bother picking the nuts off – they just eat them on the stem. Unfortunately as they pull branches closer to them as they forage they do a lot of damage.   The hazelnut battle is won this year,  next – the apple and walnut trees!

Well, the bears returned again tonight and the cubs were very determined to get at the nuts. We had two of them up one hazelnut tree and all my shouting and noise making didn’t scare them off. The mother was huffing and snorting on the other side of the garden but wouldn’t come near. I finally had to pull out the garden hose and spray the cubs which eventually did the trick and they ran off full of nuts but a little damp. Not boding well for the nut crop! 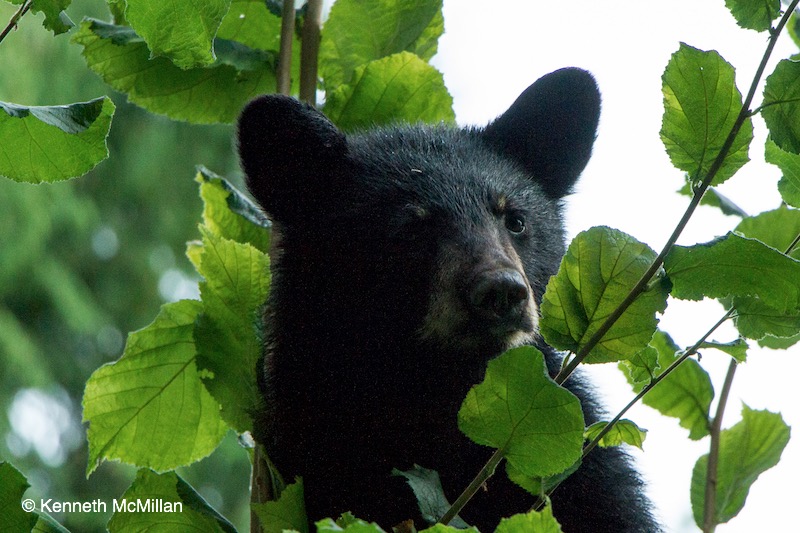 We always know when our nuts are getting ready – when the bears appear. We had a mother bear and two cubs this morning checking out the hazelnut and walnut trees

The mother bear looking for walnuts 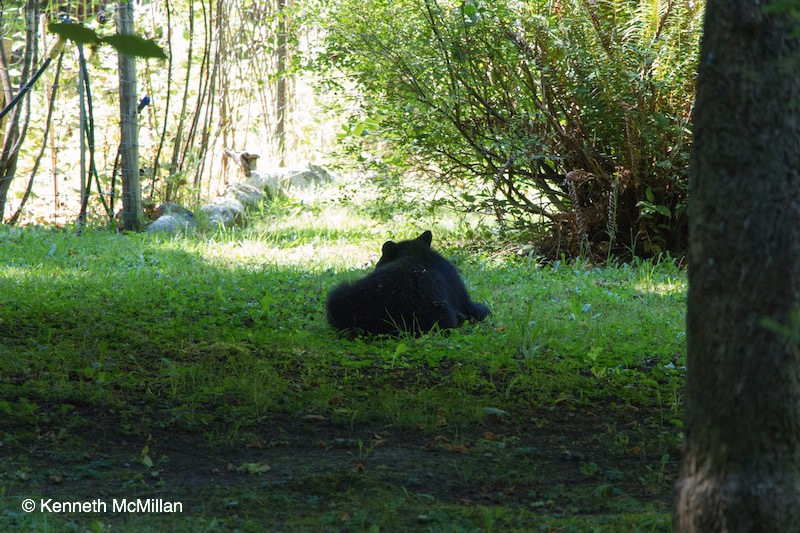 Meanwhile, one of the cubs enjoying the hazelnuts

As the nuts aren’t ripe yet I had to ask them to leave. We try to pick our produce as it ripens to discourage the bears so it is a bit disheartening when they show up before the nuts are ready. Fortunately there are lots of berries right now and theses guys are looking very healthy. They show up about once a week to see how things are progressing so hopefully they won’t be back for a while. Always wonderful to see though.

A beautiful new addition to our pond plants 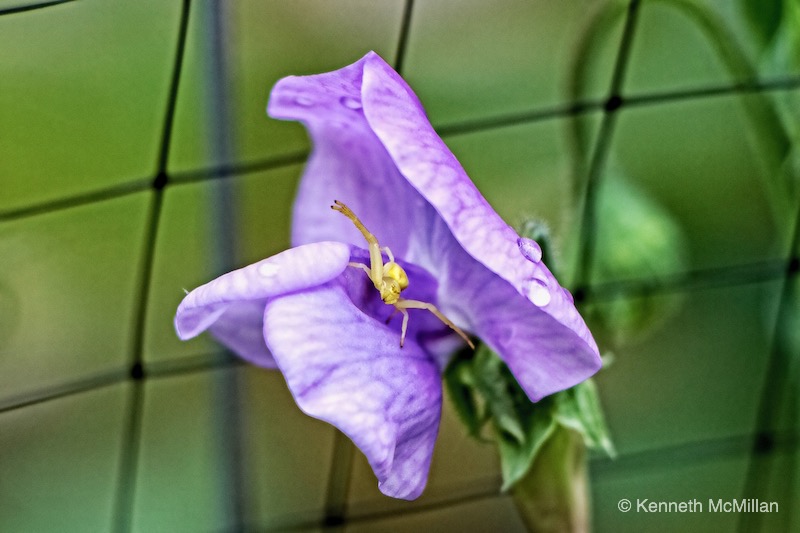