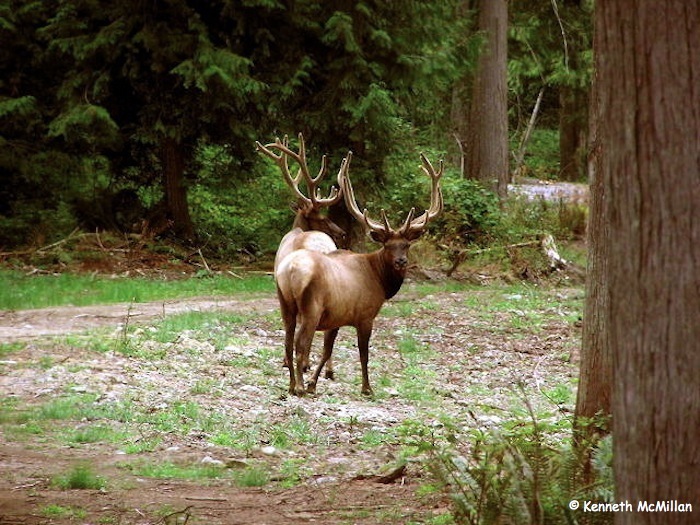 Roosevelt Elk were introduced into our area in 1989 to try to bolster the elk population in British Columbia.  Twenty-two animals from Vancouver Island were transported to a site 17 miles (26 km) to the north of where we live.  The herd did very well in their new environment and soon started to multiply.

As they did so, they slowly headed south and we saw our first elk in about 1992.  It was an amazing sight.  I was looking our our kitchen window towards our guest cabin when I saw something moving behind the cabin.  It was so large my mind had a hard time computing what it was.  The bulls can weigh up to 880 pounds (400 kg) and the females about 550 pounds (250 kg).  They stand about 5 feet (1.5 metres) tall and their antlers can spread from 5 to 7 feet (1.5 to 2 metres) wide.  What I saw turned out to be a herd of eight or nine of them.

When I went out to take a look they spooked and were gone in a flash.  It was incredible to see such large animals disappear so quickly and so quietly.  Eventually we saw them often as they liked to browse in the forest behind the cabin.  They soon became accustomed to me going out and cutting firewood.  The chainsaw doesn’t bother them and they will stand or remain lying down as I’m cutting.  It is only if I start to approach them too closely that they will get nervous.

They are slowly transforming our forest.  Where we once had thick underbrush , the elk had cleared that out and we can now see deep into the woods.  Other than that we don’t see any apparent damage to the forest other than long, deep scratch marks on the alder trees where they rub their antlers.  In fact, we saw those scratch marks first, before we knew elk were in that area and thought we had a very large cougar sharpening it’s claws in the trees.

Elk in the Yard

While other people have had lots of problems with elk destroying their fruit trees and gardens, we have only had one elk come onto our grassy area and it didn’t touch our garden.  I don’t know why that is but perhaps the day is coming.  We have seen up to 15 in the herd so the day they decide to come for lunch might be quite devastating.   Until then though, we will continue to enjoy them.

This site uses Akismet to reduce spam. Learn how your comment data is processed.